Skip to Main Content
Back to ~ ARCHIVE LIBRARY (SOLD)

This is a nice and crisp 8” Second Model American with serial number 17008. The bore is about very good, bright with strong rifling but does have a small amount of corrosion from the black powder. The outside has mostly turned a plum color but still shows 35% blue colors. The mechanical function and index is very good, crisp and tight. The wood grips are very good except for a small ding near the left rear heal. This American was most likely made in 1873 and was a big improvement over the slow extracting and loading Colt Single Action Army revolver. It has been mentioned that Buffalo Bill Cody purchased an American in 1874; Wyatt Earp allegedly carried one at the OK Corral shoot out: and some were known to have been carried at the Little Big Horn in 1876. The S&W American’s were cutting edge technology. 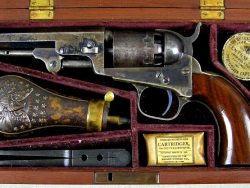 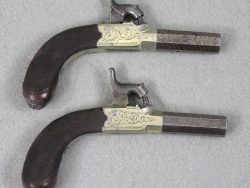 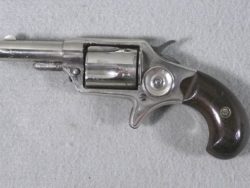 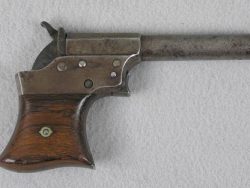